The Development of Swords Castle Cultural & Civic Quarter, which is co-funded by the EU’s European Regional Development Fund (EDRF) and Fingal County Council, will redefine the existing built heritage of Swords by providing a series of usable amenity spaces that will improve the connectivity between the town and businesses as well as brand and market Swords as a destination for visitors as well as a place for citizens to enjoy.

This ambitious large-scale plan will be delivered over two phases. 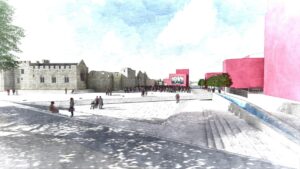 Will see the carrying out a number of alterations and upgrades to the castle which will allow Swords Castle to develop as a suitable venue for planned event use that is accessible as both a heritage tourist attraction and public amenity.

Will enhance and unify the public realm areas immediately in the vicinity of the Castle (Main Street, North Street, Bridge Street) with appropriate finishes, materials, signage, lighting and landscaping/trees as well as provide a new external public events space with Swords Castle as a backdrop. The area will be integrated with the proposed civic centre developments and improved linkage to the public park with North Street and Bridge Street will be created.

Fingal County Council identified the development of a Cultural Quarter in the heart of the town of Swords as a key project in the delivery of its vision to engage citizens, promote enterprise and attract visitors. The vision for the Swords Cultural Quarter is based on the understanding that successful towns use their cultural heritage to strengthen their identity. The objective is to stimulate and achieve economic and social regeneration in the vicinity of Swords Castle and at the junction of Main Street, North Street and Seatown Road by developing a new Cultural Quarter and destination at this important location in Swords historic centre.

This project consists of an ambition for a defined Civic Space, a new public landmark and a new destination that will reinforce Sword’s position as the County town and will prove a vital asset in developing and strengthening a distinctive identity. A Cultural Centre will be at the core of the Swords Cultural Quarter and will include a library space, performance venue and arts venue. Further, it will include a number of support facilities which could be utilised for the artistic, cultural and community needs.

The objective of the SCQ project is to energise this area of Swords in order to make a balanced town that provides places, buildings & spaces for both cultural & economic activity for all its citizens and to create a new sense of place.

Background to the proposal:

The realisation of Swords SCQ derives largely from two major documents commissioned in 2014 and 2015- Swords Castle Conservation Plan and ‘Swords Castle Cultural Quarter Masterplan’. The conservation plan detailed Swords Castle as the best surviving medieval episcopal manor in Ireland and is designated a National Monument. With a rich assembly of historic buildings of great antiquity, it is a complex site representing at least 500 years of development, redesign, alteration, re-use and adaptation. It reflects the changing fortunes and lives of Dublin’s archbishops and later owners, and the architectural fashions of their times. The curtain walls enclose over an acre of land that slopes down to the Ward River. This complex of buildings is made up of many phases of reuse and redesign reflecting its long history and changing fortunes. Swords Castle is a landmark and maintains a strong, distinct visual and physical presence over the town of Swords sited as it is as the vista closer at the north end of the main street of the town. However, despite its physical presence, its historical significance and its importance in the development and the layout of Swords town, the site has lacked public legibility and has largely gone unrecognised in the consciousness of the people of Swords and the public at large. The Masterplan study identified the area around the Castle as the location for Swords Cultural Quarter. It describes in detail the physical conditions and issues identified during the stakeholder and public consultation process, establishing issues as the key challenges that should be considered. It defined the aspirations for the Swords Cultural Quarter:

The current plans are at early stages of development. 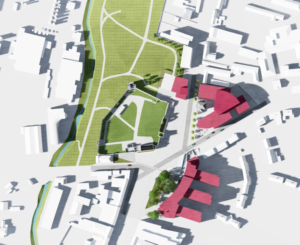 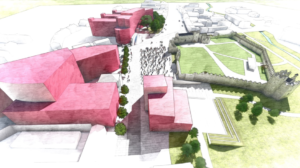 The ambition of the development is to provide ;

The new proposed buildings and spaces will be of high architectural quality bringing cohesion between the elements of the new quarter and the town, respect and enhance the past, create a landmark and a destination for local communities and visitors alike.